What We Are About

The Mission of the Oak Ridge Foundation is to support and enhance Oak Ridge High School and the El Dorado Hills Community by promoting interscholastic, academic, and cultural programs as well as capital improvements that promote continual learning.

We are a qualified 501(c)(3) charitable organization and are entirely non-profit.  Your investment in ORHS will nuture and educate future generations of El Dorado Hills students. Every donation, no matter how large or small, counts! 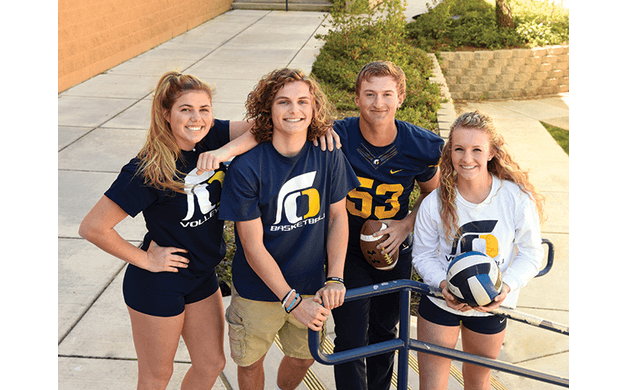 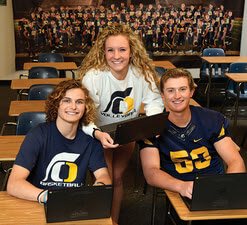 The members of the Oak Ridge High School Foundation are a tenacious bunch. In fact, you could say that just like Trojans, the school’s mascot, this group of parents, alumni and community members are warriors—dauntless in their quest to make Oak Ridge High School one of the top-performing high schools in California.

The foundation wears its Trojan armor proudly and is confident in its mission “to support and enhance Oak Ridge High School and the El Dorado Hills community by promoting interscholastic, academic and cultural programs, as well as capital improvements that promote continual learning.”

Nearly two decades ago—when Oak Ridge had a much smaller school population and El Dorado Hills was on the verge of a huge housing boom—Ann Root and Anthony Scotch recognized the need for the community to provide more to the school, so the two launched the foundation and began conducting fund-raisers and donation drives. One of their first contributions was assisting in building a new football stadium. “With vision, determination and hard work, Trojan Stadium rose to be the standard for the El Dorado Union High School District’s athletic competition facilities,” President Brooke Van Komen explains.

“Over the years, the foundation has donated more than $2 million to Oak Ridge. It has helped to upgrade and add to the funds from the district to provide more classroom technology, music and performing arts support, science equipment, gymnasium reconstruction, baseball and softball field renovation, netbooks, software, and the list goes on.”

Van Komen has been involved with Oak Ridge High School for the past eight years in various capacities, including Sports Boosters, chairman of the Blue and Gold Auction, a parent volunteer supporting ASB Leadership, and secretary to the foundation before assuming her current role as president. “I literally became involved by going to teachers and administration and asking, ‘How can I help?’” she says.

Currently, the foundation is collaborating with the El Dorado Hills Community Services District—along with the El Dorado Union High School District—to create an outdoor learning experience along the New York Creek Trail. “With curriculum from the State of California Education Environment Initiative, we hope to provide residents, educators and students with an outdoor lab experience for field trip opportunities and educational, family-friendly hikes,” says Van Komen. “We also support the administration and faculty of Oak Ridge with ongoing teacher training, classroom grants and software updating.”

This summer and fall, the foundation will coordinate a football ticket sale fund-raiser for the Trojans (reserved seats for all varsity home games—much like season tickets for college or pro teams). Plans are also in the works for the 18th annual ORHS Foundation Golf Tournament at Serrano Country Club on October 2.

“Proceeds [from] these and other activities go to the foundation for ongoing and future Oak Ridge projects,” Van Komen emphasizes. “Anyone and everyone in El Dorado Hills benefits from the Oak Ridge High School Foundation and can become involved.”    www.orhsfoundation.com 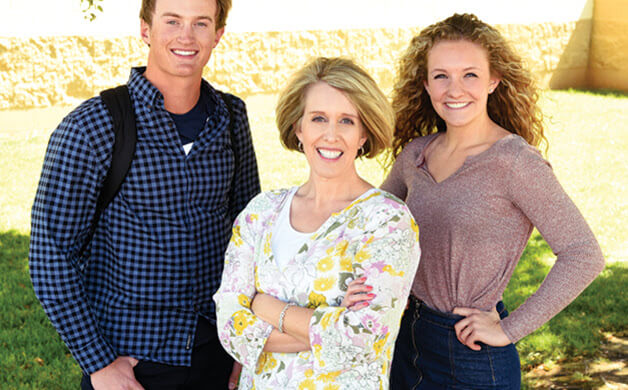 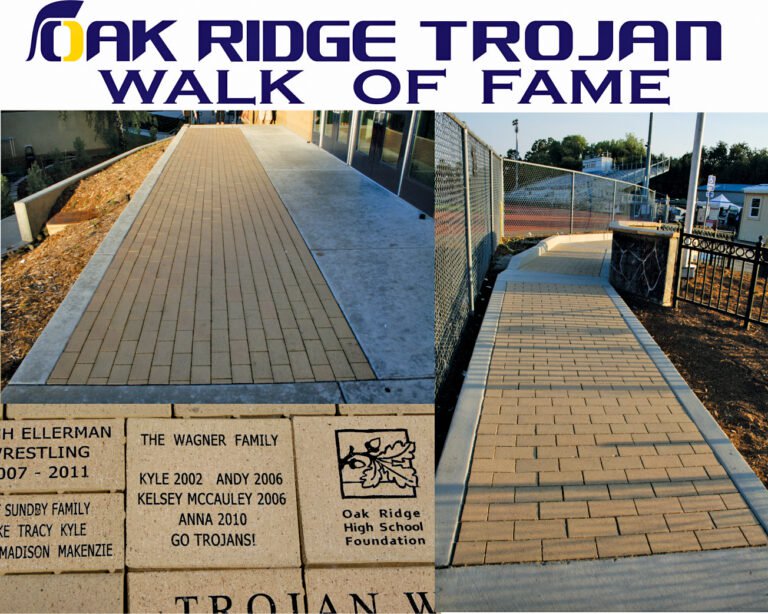 For 20 years the foundation has steadily made its mark, funding and improving many aspects of the school’s programs. It runs purely on volunteers and has raised more than $2 million, all of which goes directly back to the high school. In constant need of community support, the foundation asks parents to contribute a little or a lot, in time or effort, to causes that have proven invaluable to students, teachers and parents.

Started in 1999, founding board members Ann Root, Troy Miller and Anthony Scotch championed a simple mission: to support and enhance ORHS and the El Dorado Hills community. By supplementing both state and district resources, the foundation looks for ways to enable students to achieve greater success in academic, interscholastic and cultural pursuits.

Other memorable projects include the student quad remodel in 2002, the new scoreboard in 2003, the ticket booths and walkway in 2004 and the all-weather track in 2005. In the following years the foundation has provided choir room risers, computer tablets, art and media camera equipment, manufacturing and engineering equipment upgrades, gymnasium reconstruction, baseball and softball field renovation and is presently helping to fund the Challenge Success and Well Balanced Student initiative.

Brooke Van Komen had been involved with Oak Ridge High School for eight years before assuming her current role as foundation president in August of 2016.

“I literally became involved by going to teachers and administration and asking, ‘How can I help?’” the mother of four said.

Teachers greatly benefit from the foundation’s help, so far receiving $7,000 in grants this year. “Maybe they’ve seen something in a conference and they want to do it here at Oak Ridge,” Van Komen explained.

One teacher approached the foundation for Chromebooks to help her math students raise their test scores. The El Dorado Union High School District committed to matching the foundation’s grant and had a full Chrome cart ready for the teacher within weeks of her application.

“We know what this campus needs. We are the first responders,” Van Komen told Village Life.

Another major foundation accomplishment was building Anthony’s Grill, the concession facility at the stadium where teams sell refreshments. In 2011, in conjunction with Measure Q bonds, the foundation funded improvements, including new freezers, refrigerators, nacho machines, cabinets, ceiling fans and air conditioning as well as new restrooms and an outdoor kitchen barbecue area. The Grill helps raise funds for all ORHS sports teams.

Boasting the most applied for scholarship at ORHS, the foundation awards $2,000 in grants to students every year. Twenty-seven scholarships were awarded last year. This year the number climbed to 30.

The foundation is also responsible for booking Jessie Funk, a popular motivational speaker for young adults. Funk comes to Oak Ridge this month for two assemblies.

The Foundation Golf Tournament, a main fundraising event, will take place Sept. 30 at the Serrano Country Club. The annual event raises $25,000 to $35,000 each year. Stadium seat and VIP parking space sales raise approximately $20,000 yearly. The foundation has also organized capital campaigns, one in 2003 that raised more than $1 million and a second in 2012 that raised more than $250,000. Scoreboard advertising on the football field and main gym as well as the Trojan Walk of Fame raise significant funds, but all the programs require volunteers.

Shellie Cook, mother of two and foundation board member since 2013, got involved through a friend. “We impact every single student on campus and areas on campus where parents don’t usually get involved,” she said. “The foundation helps our kids have the best education possible.”

“One of the special things about being part of the foundation is getting involved with the school,” said West, a mother of four. “You get to have a say.”

The foundation meets monthly and ORHS Principal Aaron Palm is a usual attendee.

Contact the ORHS Foundation for volunteer opportunities at orhsfedh@gmail.com.

‘Cannon Man’ gets his own grill

Oak Ridge High School Foundation Past President Anthony Scotch couldn’t figure out why Principal Steven Wehr had to drag him out to the high school’s concession stand on a rainy Tuesday evening.

Wehr said there was a problem but when Scotch arrived he only saw smiling faces as his friends — foundation board members — unveiled the new stand’s new name: Anthony’s Grill.

“I was just blown away,” said Scotch, 55. No pun intended there since he’s the guy who launches the cannon blast every time the Trojans score a touchdown at home games. “I figured I’d just get a plaque or something.”

Well, they gave him a plaque, too. But the real prize is Scotch’s name on a $607,000 project he managed. Anthony’s Grill houses a full kitchen as well as men’s and women’s bathrooms. The foundation contributed $62,500 to the project (the El Dorado Union High School District funded the rest), according to Wehr, and spent another $22,500 on an outdoor barbecue area.

“Before, we had some old, beat-up trailers,” Wehr said. “This is all part of Anthony’s vision.”

The principal called Scotch a “driving force’ behind many of Oak Ridge’s capital improvements.

Foundation board member Bev Bock issues a new release explaining that Scotch, who served as foundation president for nine years, “spearheaded the foundation’s Capital Campaign in 2003 raising over $1,000,000 in commitments for stadium renovation projects, as well as personally committing $50,000 to the project. He volunteered as project manager and installed home side stands, scoreboard, ticket booths, all-weather track and security fencing.”

Foundation board member and retired Oak Ridge athletic director Ann Root said Scotch brought a “spark” of enthusiasm to the board when he joined. “His knowledge in construction and his ability to get things done just pulled everything together,” she said. “We’re very grateful.”

Why? “It’s because of the kids,” Scotch said. He and his family have lived in El Dorado Hills since 1990. Two of his sons graduated from Oak Ridge and a third, sophomore Dominic Scotch, currently attends.

Dominic has followed in his dad’s footsteps, giving back to his school. For his Eagle Scout project with Troop 465, sponsored by the Rotary Club of El Dorado Hills, Dominic chose to improve the drainage and upgrade the landscaping near the snack bar that now bears his father’s name. His project was completed this past summer.

Looking at Oak Ridge’s shining, if not slightly soggy, stadium and the new concession stand, Scotch said, “I understand that facilities make a difference to the kids. (Good facilities) enhance the experience, the memories.”

About the ORHS Foundation
The foundation’s mission is to support and enhance Oak Ridge High School and the El Dorado Hills community by promoting interscholastic, academic and cultural programs as well as capital improvements that promote continual learning. Eleven years ago, a group of concerned parents, community and school officials formed the Oak Ridge High School Foundation, a 501 (c)(3) charitable organization, dedicated to student success through vision and community support of the school. The goal of this not-for-profit organization is to provide the community support and funding needed to make the school’s vision and mission a reality. 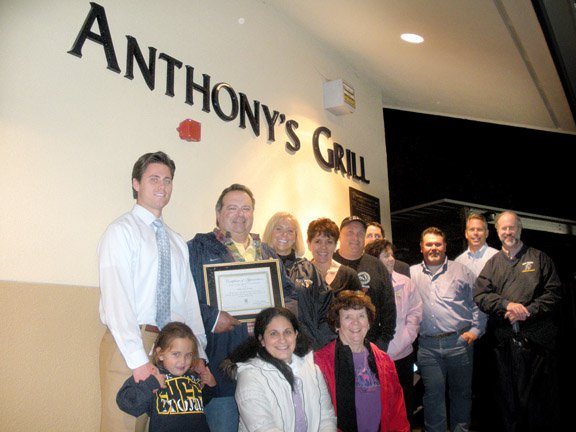